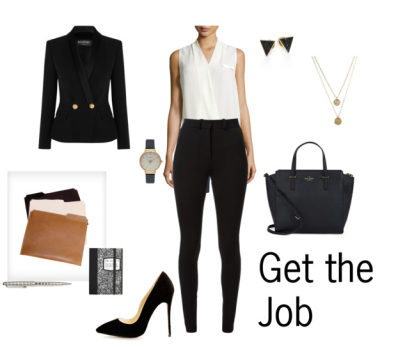 First things first, you need to prepare. Don’t leave everything for the last minute, because believe me you won’t find that brown pant even if you swear you saw it yesterday and the printer will magically stop working. You will need to try on the outfits beforehand (I mean days), maybe you need to alter a shirt, or fix a hem, if you do that beforehand it will save you stress. It`s important because you might have a picture in your head of what it looks like and you could be wrong (it happens to the best of us). Needless to say you have to be fresh of a shower (or had a shower the night before), nails groomed and well manicured (no chipped nails), smelling nice and looking clean (no greasy hair). The night before you have to have your resume all printed out and in a new folder (no, the one you used for math class in 8th grade won’t do). If you show up with messy and crumpled folders with spots in it, it will make you look as if you don’t care about the job, and the interviewer can overlook your great capacities because you don’t look put-together. First impressions are everything, remember they don’t know you, they have an hour (more or less) to figure if you are right for the job, so you have to be on your best self. It’s like a first date, look as great as you can.

1-Resume (in different languages if applied, always bring extra just in case), if you have a portfolio or any supporting material, bring it!

2-Clean and neat folder. Buy a pack in your supply store, they are cheap and make a difference, remember you want to have the best chance in succeeding!

3-A notebook and a pen. Why? Because they might give you their phone number, or important information you want to write down, or even stuff you need to bring for a second interview! It looks very professional to have somewhere to write other than your phone.

4-A book. I always arrive at least 15 min early, and if I have spare time I read, as soon as I get into the premise I don’t like to be on my phone, I don’t want to be that girl who can’t live without it, I like to focus and relax.

5-Toiletries/beauty supplies. Always have some elastic bands, bobby pins, lipstick, kleenex, a deodorant (you never know) or anything you might need as a touchup. Even if you don’t use it, you’ll be glad you have it just in case.

6-Fresh mints, no bubble gum, you can’t be chewing, that doesn’t look really nice, have a mint or two before to ensure you have good breath (nothing says goodbye like garlic or that Doritos cool ranch)

7-Celphone with credit, and all the information of the place and the person you are going with, you might be caught in traffic because of an accident, or get lost in the building, so you need to be able to have your interviewers contact number in case something happens you can call right away. Google the address of the place beforehand so you know how to get there, write it in a post-it, in your phone and in your notebook (what if suddenly your phone dies, have it in several places).

The image above is my power suit. A cross body shirt that looks polished yet breezy, a high waisted pant (yes pant, no leggings or jeans), high heels, a strong blazer and a structured bag. I do know that I go for Fashion interviews, but still, I’d rather look polish than trendy (I really dislike that word). It’s better to be overdressed than underdressed, and there is something about wearing a tux like outfit that makes me feel powerful. Who said suits are boring?

Shirt- NO cleavage (keep it classy ladies), no belly buttons exposed (you are not at the beach), nothing too tight, too flashy (no sequins or red velvet unless you are Austin Powers). No spaghetti straps, no halters, nothing that exposes too much or looks like you might go to the pool later. Also refrain from using t-shirts, anything too wrinkly or see thru and please wear a nude colored bra, It is not the time to wear a lacy number you bough on valentines. Wear shirts that drape nicely on your body, you can wear a print or colour, as long as it goes well with the outfit and it´s not too big, it might have a nice detail in the arms or in the neckline.

Cover up- I have the impression that strong woman wear strong blazers. That’s why I love wearing blazers that are well structured and are form fitting. Look for fabrics that don’t have shine (no silk or satin), that button on your waist (making it look awesome) and that don’t wrinkle, a cotton polyester mix will do the trick. It does’t have to be boring, it can have cute buttons, or a nice detail on the pocket, but don’t go with crazy prints and brocades (unless you want to work in Versailles). Keep saggy sweaters for a chilly night, they don’t make you look presentable. If you have an extreme climate situation you can always add a layer and take it off beforehand. One day it was freezing and I added a cape and a big scarf, as soon as I got inside the building I took it off, kinda felt like superwoman, I think I even impressed the security guard.

Bottom- I am a girly girl I love skirts and dresses. But as I said I am athletic, so I do have strong legs and even though they look great in a skirt, that’s not really the focus I want in an interview. Short hems come with many questions like at what height? Will I seat cross legged? What if a wind blows out of nowhere and I am suddenly flashing my panties? So i discard them and wear the pants, I mean business people. The last thing you want to be is inappropriate or provocative (even if you wear a maxi skirt the outline might be too much, wonders of the female body). Pants vary from person to person, I have some high waisted trousers that are skinny (not overly skinny, but skinny non the less) that work wonders for me. You will have to see what looks great on you, maybe its a bootcut. maybe its a little more flared. There is no rule work your body, a pant that never fails is the wide leg pant (not overly wide), it dissimulates the hips and makes you look taller and leaner. Be careful with pleats, they add volume to the tummy and pockets add width (great if you don’t have a big behind).

Shoes- I am a sucker for heels so I have been training since I was 7 (up and down the stairs with my mom’s heels when she wasn’t in the house) so I can strut like it no ones business, hell I have even been able to run in them. So this is ONLY if you can work them. If you feel comfortable in a kitten heel, work it, the thing is that you want to be confident. And nobody can be confident when they think they might fall. Heels give you heigh (a bit obvious here hehe) and they also make you feel more empowered, maybe its the wind in this new found height, maybe its the fact you can now reach more stuff of the fact it makes people stare, I don’t know what is it but it makes you feel fabulous. Work a pair that is classic, if you have a hard time walking in them try a chunkier heel or a wedge. Preferably closed toe and be sure it fits you well and its not the first time you wear it, you don’t want blisters or pain!

Bag- Now that you know  what to have inside, it’s time to know how to choose a bag to carry it. I normally stay away from anything monogrammed or that screams a certain brand. It might look a little too forced, so stay with a pretty bag that might be a luxury item, just not one that screams $$$$. I like a structured tote because it can hold your papers and keep them nice and wrinkle free. It will hold anything you need and look like you are ready to be taken seriously.

Jewellery- I am an accessories fan, but even I know this is not the moment to showcase my stud bracelets. I always have a dainty necklace I wear daily, so I would complement it with a nice pair or earrings (don’t wear big hoop earring or something super dangly that look really flashy), and a watch because when I have an appointment I want to know what time it is and as I said, I don’t like checking my phone.

This outfit is my work it outfit, see it as a template depending on your job search, I have worn snakeskin heels (faux, and remember it’s a fashion job). You can alter it to your needs, every job is different and every place will be different so research a little about the company or even show up in the reception one day to see what they wear. Dress for the job you want to have and always be a little more dressed up, everyone will notice in a good way, good effort is always great. I believe that your personality, your abilities, and your charm will be your ticket in, your outfit is a mere expression of that, don’t let a super funky outfit take the center stage when you and your resume are the stars of the show!